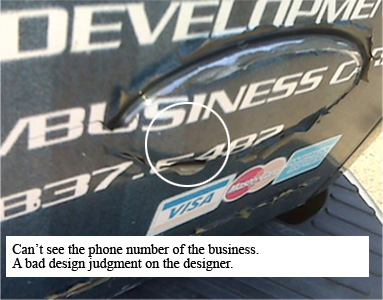 It is true that the economy is taking a plunge (especially in California). Naturally the consumer is stretching their money as much as possible. Everybody is looking for a deal on food coupons two for one specials, and ninety nine cents stores are becoming shopper’s outlets.Business owners are being caught in this bad economy wave as well. Unfortunately businesses owners have been cutting their quality and and adding quantity. We have allot of interesting case studies that will make you reflect on your business. However, we will only cover two of them.A promotional company company came over and asked for a quote for a tail wrap on her truck, we were happy to giver her a quote on a partial car wrap. We told the prospect that we would design a great ad campaign her her company, print, laminate and use 3M material for the highest durability. The quote came about three hundred and eighty dollars. The client flipped an told me “I can get it for one hundred dollars”!We were disappointed in her desicion and warned her on using car wrap companies using cheap china material. She went anyway with the other company. Six months later the client came back upset She had explained a company called inkspot wrapped their vehicle, and within three months the vehicle wrap started to peel off. As you see on the pictures the client got what she paid for. She eventually took the wrap of because the printer went out of business and she couldn’t get it redone. Was it worth the headache to save a few hundred dollars?

This prospect had an opportunity to sell their product on all of the costco and sams club outlets in the U.S. Costco asked for a test demo to see if the product would sell. They hired us for our expertise on design and print for this great opportunity. After consulting with the client, we made a strong marketing plan.The design was executed, the colors were chosen, the size of the promo flyers were chosen. and even the spokes models were ready to go. However the plan shifted on the printing. They felt that the price of our printing was a bit high.At the end we just billed them for he design, and they went to find another print shop. To the clients disappointment, the material was build cheap the presentation became embarrassing when the buyer from costco saw the poor quality of printing. Was it worth it saving four hundred dollars and to have a cheap setup in front of a client? In the end we saved the project but hey paid rush fees and costly shipping costs that could of been avoided.

We're not around right now. But you can send us an email and we'll get back to you, asap.