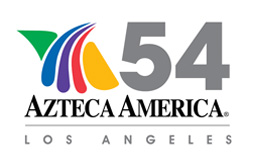 Azteca America is a very powerful Latin television network in the United States. It focuses on prime soap operas, sports (soccer, ufc, boxing), entertainment, music videos, and news. One of their hit shows that attracts over millions of viewers called “La Academia” (The Academy). This show is like American Idol version for the Hispanic community.Recently they had singing tryouts at their station in Glendale, CA. Over three thousand people showed up to try out for the show (eventually they would be flown to Mexico for final rounds). The production was pretty big and outside vendors were needed to assist this show.The television station needed a well respected printer that could handle digital, litho print, and to handle installation. Some print firms didn’t have the installation capability, and others couldn’t print digital and litho in house.Imagination Works was the turning point to execute numerous print jobs in a twenty four hour time (continued on the bottom of the page).

Imagination Works had a quota and time line to wrap Azteca America’s bus, print and install eight banners on their building, print back drops, autograph cards, directional signs and posters in two to three working days. All ten projects were printed, cut, delivered, and installed on time. The show was a complete success and the client was completely satisfied with all of their print projects.

We're not around right now. But you can send us an email and we'll get back to you, asap.